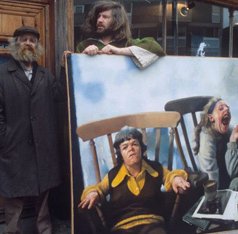 It is almost unheard of today, that the death of an artist could elicit such an emotional public response  as that of Robert Oscar Lenkiewicz. His paintings communicated directly with ordinary people, who recognised that here was not only an artist of considerable talent but someone who had the power to make them contemplate their own lives and the world they live in.

Robert Lenkiewicz was a natural outsider and radical, consciously at odds with contemporary thinking on ethical and aesthetic issues. Nevertheless, he found a broad constituency amongst ordinary people, who were attracted by his charismatic personality, his generosity and his abundant gifts as an artist and educator. Once asked how he would like to be remembered, as a sociological enquirer or as a skilful painter who had something to say about the human condition, he replied characteristically: "When one has a choice between two things, always take both." 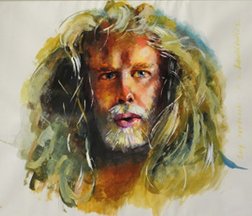 Just like many things in his life, Lenkiewicz adopted a unique position towards his own paintings. At an early age he made a conscious decision to subjugate his skill to a greater service: to become a "presenter of information" or a "sociological enquirer", as he usually termed it. By this he meant to reveal the plain fact of a person or thing. For Lenkiewicz, the act of painting was a profoundly moving experience. "To paint oneself is to paint a portrait of someone who is going to die," Lenkiewicz would often remark when asked about his many self-portraits. "And the same applies if one paints anybody else." His main aim was to capture the transient and haunting qualities of his subject. He recognised the limitations of art and considered it second best to the mystery of his subject's sheer existence.

When Robert lived in London he started painting tramps in-and-around his studio. But the police eventually encouraged him to leave the area due to attracting 'undesirables' to the affluent area of Hampstead. And, in great contrast to the "Swinging Sixties" of London, Lenkiewicz was absorbed in painting and studying society's misfits, mentally ill and down-and-outs. However, after moving to Plymouth (via a short spell in Cornwall) Robert continued to paint tramps. This lead to a large project & exhibition on vagrancy, which he exhibited in one of the warehouses he had commandeered throughout the city to house the down-and-outs, known as "Jacob's Ladder" (so-called as the entrance was originally gained via a ladder). So ignored were the vagrants that a council official opening the exhibition remarked how fortunate Plymouth was to have very few vagrants. Lenkiewicz had shrewdly anticipated this official blindness and, on a signal from him, dozens of these "invisible people" flooded into the room to make his point.

Lenkiewicz had continued to provide a free Christmas dinner for the homeless at Bretonside bus station up until the year before his death. Many of the colourful characters he painted became an integral part of the Lenkiewicz myth, such as Edward McKenzie, known as "Diogenes", and Albert Fisher, known as "The Bishop". According to Lenkiewicz, The Bishop was "an extraordinary man with large hands and a great red beard. He would sleep beneath a tree in Stoke Damerel graveyard and believed himself to have mystical experiences. He came rushing in one day and said that the sun had been shining through the tree, that every single leaf had turned into a man with a top hat, that each man with a top hat had a pint of beer in his hand and that each and every one of them had wished him "Good morning!" In the posh Oxford accent he had cultivated, he said, "I had a vision there. Not a dream, not a nightmare but a vision there!" This was the start of his series of projects, in which he examined the lives of people living on the fringes of society: the mentally and physically disadvantaged, the addicts, the criminals, the sick and dying. He became the champion of the outsider.

His Projects were large in scale and ambition. Lenkiewicz recalled his fondness for the epic scale whilst still a student. At St. Martin's College of Art, he painted a canvas 364 feet long. "What happened, Lenkiewicz?" asked the Principal. "I'm sorry?" Lenkiewicz replied. "Well, that painting, what happened?" "I don't understand, " Lenkiewicz replied again. "Well, did you run out of canvas?". Lenkiewicz's taste for the grand gesture led to his creation of the famous Barbican mural in 1971, a painting 3000 feet square, dealing with the influence of Jewish thought on Elizabethan philosophy. Although Lenkiewicz was later rather embarrassed by it ("fairly skilled but illustrational"), the mural became a landmark for Plymouthians, as well as visitors to the city. Unforgettably on April Fool's Day, as a result of one of his regular disputes with the local Council, the artist with typical wit whitewashed over it and replaced it with three flying ducks! In many ways, the history of Lenkiewicz is the history of Plymouth over the past thirty years. He was the most hardworking of artists, obsessive in his desire to record the event in front of him. To Lenkiewicz there was more humility involved in presenting one hundred images on a theme that didn't worry about 'high art' than attempting to make the perfect painting. This didn't stop him producing some haunting early individual pieces: "Plymouth Mourning over its Unfortunates"; "The Lynch"; "The Burial of John Kynance"; "Belle and Diogenes at prayer". The sombre colours - greys, greens and earthy browns - give these paintings a reflective, elegiac quality.

The late Sixties and early Seventies were a time of great poverty for Lenkiewicz, with a very low standard of living in various studios around the city: Keppel Terrace, Clifton Street and Rectory Road. During the winter he would be forced to burn cardboard boxes in his studio to keep warm. The little money he earned from selling paintings was spent on paint and canvas. Often he would paint on parachute silk or sailcloth found in bins by the dossers themselves. Many works from this period have rough seems stitched across them.

From the time of the late seventies in a series of more private Projects, "Love and Romance", "Jealousy" and "The Painter with Mary", Robert showed that he was not afraid to turn his painter's eye inwards: He investigated his own personal relationships, in particular what he called the "falling in love experience". These he recorded with a manic intensity in paintings and notebooks, often in a more subjective, allegorical pictorial style. His conclusion in these investigations was that the addiction of the lover to the loved one was similar, if not identical, to the addiction of the alcoholic to drink or the fanatic to a belief. Thus was born his philosophy of "aesthetic fascism", treating the other person as property. He applied this theory starkly on a sociological level in his "Observations on Local Education" to society's treatment of the young. In this project, he painted every head teacher in the city, memorably capturing the gulf between the system's aspirations and its reality in paintings such as "The Blind leading the Blind", "The Burial of Education" and the "The Glue Sniffer", an extraordinary piece of virtuoso painting. Lenkiewicz's hope was that people would see the exhibition and think "Oh my God! These are the people teaching my children!" Lenkiewicz thought it was as futile to try to argue someone out of their cherished beliefs or prejudices as it was to talk them out of thinking they were in love. His point was to shock them into a new awareness, a new aesthetic understanding.

In 1994 this was followed by an ironic look at his own relationships in "The Painter with Women: observations on the theme of the Double". For the first time, Lenkiewicz chose to present the complete exhibition elsewhere than his own studios at the International Convention Centre in Birmingham. More than 35,000 people visited the show in a single week, a figure easily surpassed in 1997 by his first exhibition in a public gallery, the Robert Lenkiewicz Retrospective at Plymouth City Museum. But time was running out. His health was failing, the result of a serious heart condition. Undaunted, he began his largest project yet on "Addictive Behaviour" with plans for over 800 sitters. His aim was to cover every "addictive scenario", including alcoholism, theological convictions and obsessive relationships, but the project remained unfinished at the time of his death. Lenkiewicz will be remembered as a genuine outsider and radical, consciously at odds with current thinking on ethical and artistic issues. He cared less about the opinion of the art critic than that of the man-in-the-street. His art is generous in its ability to communicate with ordinary people, who are little interested in the more esoteric world of contemporary art; it is democratic and humane but never sentimental. Above all, his paintings reveal people for what they are without moral judgement. If the task of the artist is to show what it was to be alive in a certain time and in a certain place, then the qualities of Robert Lenkiewicz's work will increasingly become clear to future generations.  Read More.... 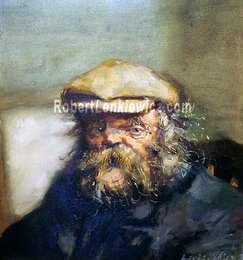 "A tramp who's involvement with Robert made him almost as well-known as Robert himself; due, in part, to the 'embalmed-body fiasco' that followed after Diogenes's death. He was a strange character, who's home, when Robert discovered him, was a discarded concrete barrel, perched precariously on top of a sloped bank of a rubbish tip! Robert nicknamed him 'Diogenes', after the Greek philosopher who allegedly slept in a terracotta olive barrel." Joe Stoneman. Read more....