Literary - the bibliophile and author 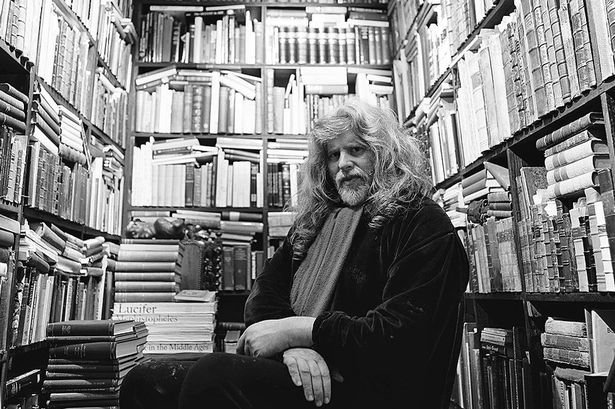 Robert was certainly a keen writer. Most of the books he wrote remained in manuscript form, while some were published during his life; and more recently, two notebooks have been published posthumously. Stacked neatly on shelves at his Lower Compton house, I remember seeing a whole volume of hardback books that he'd written - of up to around ten in this particular volume. I don't remember what the books were, but I do recall being quite impressed that as well as having written them, he'd even drawn and rendered all the covers by hand. As well as that volume there were a number of other similarly hand-rendered books amongst them that he'd written too.

Much of his writings were notes which accompanied his projects - printed booklets that accompany the exhibitions, providing commentary on the philosophical themes they contained; the 'middle period' projects of the late 70s were accompanied by pamphlets giving lists of the paintings and some choice quotes from other authors. The very latest projects also merited longer booklets. His mid 80's project called Observations on Local Education' was accompanied by both a 500-plus page book and an exhibition catalogue (pictured below). Robert also published the Notes on the Barbican Mural to accompany the unveiling in 1972 of the 3,000 sq foot Barbican Mural. A small number of these booklets are still in existence. 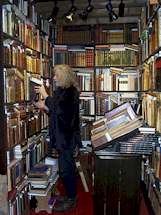 The manuscript writings are considerably more extensive than those published and for the most part reside at the St Saviours Church archive. Robert also kept a journal that he entitled 'Diary Notes' throughout the latter two-thirds or so of his life, and was often seen walking around with one of these under his arm when out and about. They exist as annual volumes, often hand-bound.

Project Notebooks were produced at the same time as the relevant project, for testing out ideas and sketches for the project in question. The Notebooks were viewed by Robert as part of the project, though their contents are nowhere near so well-known. In addition, the texts of some of the early books were published in pamphlet form (such as Death and the Maiden).

There are also a quantity of loose, single sheet aesthetic notes on various themes personal to Robert. "Aesthetic note" is Lenkiewicz's term for illustrations, generally watercolours, which usually include notes by himself or quotes by philosophers and writers exploring some topic of interest to the artist. Some of these have been auctioned subsequent to his death. Pictured, left and right, in his Barbican studio library. 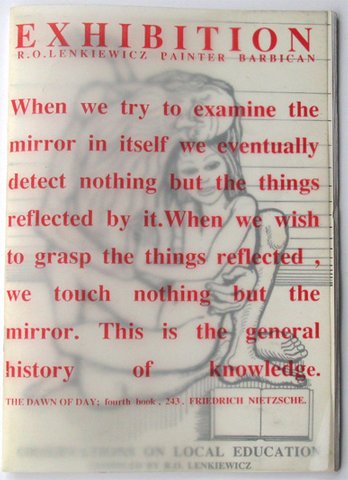 As well as Project Notebooks, there are also the 'Relationship Notebooks' (also known as the 'Aesthetic Notebooks') these were personal journals that Lenkiewicz encouraged most of his significant others to write during the course of their relationship with the artist. Some of these are richly illustrated (both by Lenkiewicz himself and the sitters) and run to several volumes. The first of these notebooks to be published is the Mary Notebook.  Published posthumously, the contents of the elephant folio titled, Mary: Aesthetic Notes, which resided in Robert's library, were re-united with various fragments which existed as separate pictures and published in a single volume known as The Mary Notebook.

When Lenkiewicz’s partners agreed to create these notebooks, which contain many intimate private reflections of their authors, it was on the understanding that the notes would pass into Lenkiewicz’s possession, to be bound as books and kept in his library as an archive of material about obsessive behaviour or “the falling in love experience”. A resource for scholars interested in the nature of human relationships.

An unwritten understanding no doubt took place between Robert and his contributor lovers about what will become of these books after his death. Fast-forward to now, and this has presented certain dilemmas for the Lenkiewicz Foundation in terms of how much of this material can be legally published in Robert's name when he was not the sole author of these books. The main problem arising from there having been what is effectively two separate authors for each book, then there is the intimate nature of his co-contributors input to consider, as they appear to have limited amount of say over the book's destiny since they are not in their possession or ownership.

Pictured left, a booklet which includes a catalogue list for the paintings

in the 1988 'Observations on Local Education' exhibition.

One such private notebook with contributions from one of his past lovers, Jane Jackson, was later vandalised by Jane herself, in what appeared to be an attempt to stop her input in the book becoming public, and also possibly down to additional discontent of Robert's role in their relationship. Whatever her reasons, it further highlights the dilemmas of the current custodians of the books - to publish, or not to publish! Or even to just simply make them accessible in Robert's library or not. The UK government recently announced plans to make changes to copyright law, with proposals to relax certain aspects of it. One such proposed change would be to make it easier for writers to be able to quote other sources in their books, and TLF could benefit from this. But copyright law is still currently a grey area - and typically so when it comes to dealing with all things Lenkiewicz!

It seems TLF have somewhat compromised on the latest Relationship Notebook to be published, by leaving out some of the co-contributors writings (input by his lovers'), and instead editing it, and then printing the remainder as a booklet. They have also presented some of the book's illustrations in loose-leaf form, ie; as individual art prints that can be framed. An unbound folio; In 2011, The Eliza Notebook was produced – a limited edition box set of 195 copies, and forms ‘Volume I’ of the Lenkiewicz archive non-folio editions. Eliza wrote the journal in the late 1970’s, and Robert produced the illustrations in it. Four illustrations from the book are presented as art prints, and these came with a 24-page illustrated guide to the painter’s life, work and ideas. 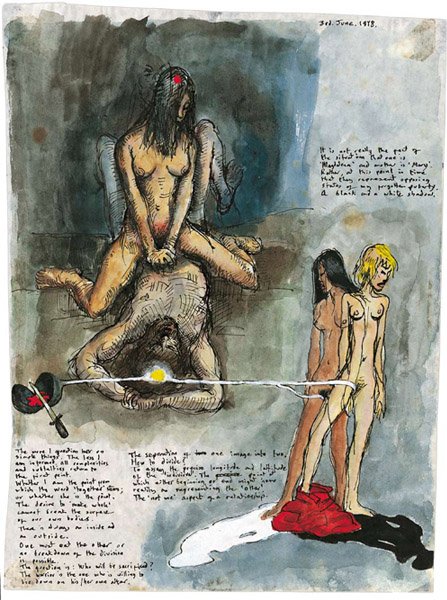 Above, a typical sketch from one of Robert's many notebooks, which also contain some personal material about his lovers who were often also co-contributors to the notebooks. 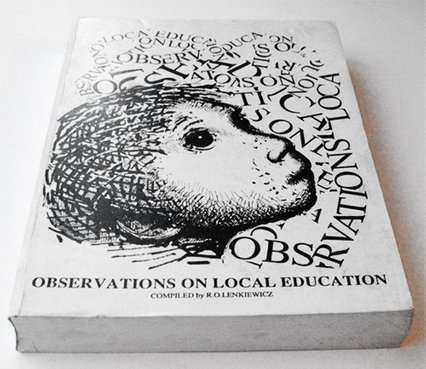 Above, a 500-page book which accompanied the exhibition: 'Observations on Local Education', which took place in the late 1980's 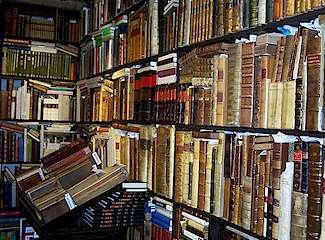 Robert Lenkiewicz owned one of the most important private libraries in Britain.

"His collection of books on magic and witchcraft was one of the finest in private hands" Wikipedia.

Robert was a massive bibliophile - he amassed a large collection of rare and valuable books over the course of his life - some 25,000! His incomparable collection of antiquarian books relating to witchcraft and demonology was the finest such collection in private hands, and possibly the whole of Europe. However, a large part of the collection was sold off by the executor of his estate in order to help settle debts, but a large number of books were saved and were passed to TLF to hopefully become part of a permanent collection of his books and paintings in St. Saviours Church in Plymouth. 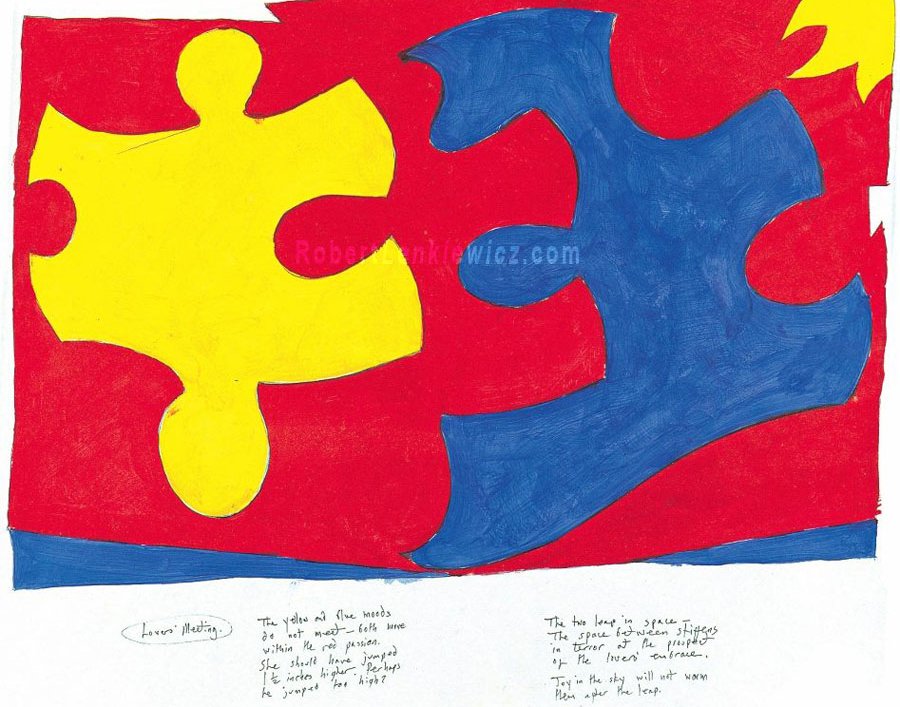 Above, Aesthetic Notes: a page from The Mary Notebook. The illustration is titled 'Lovers Meeting'. 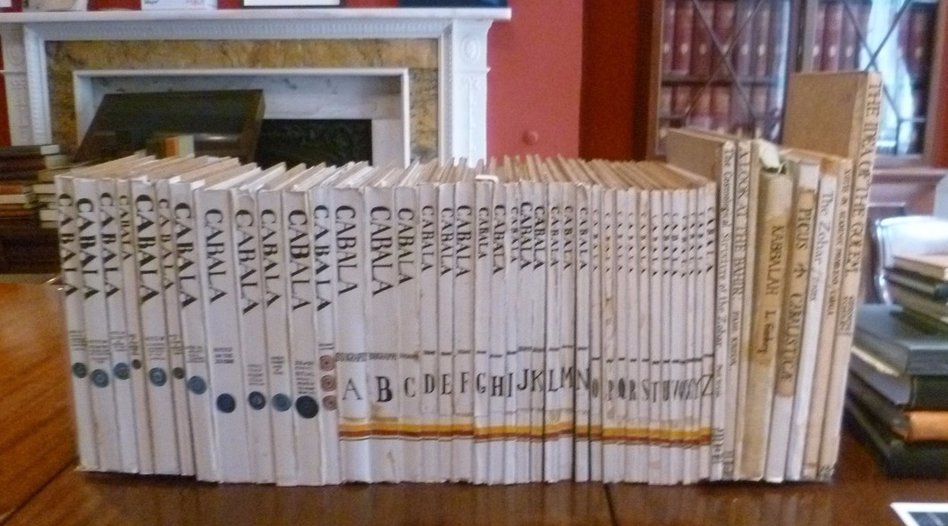 Above, a volume of Robert's books with covers that have been hand-rendered by him.