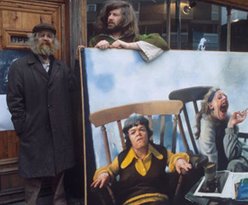 From a 2012 article in the Plymouth Herald, written by Martin Freeman:

THE estate of Plymouth painter Robert Lenkiewicz has at last been settled, more than ten years after his death. Final details of the financial element have yet to be revealed but the figure is said to be "substantial", The Herald can reveal.

That conclusion helps pave the way for a double landmark achievement in the struggle to keep the prolific painter and thinker's legacy alive. Next year will see the biggest exhibition ever of Lenkiewicz works.

The display in Germany in June 2013 will also mark the first international show of his work. Organisers of the Lenkiewicz Foundation believe the exhibition will provide a boost to his growing reputation in the UK and abroad – and help pull in visitors to the centre in Plymouth dedicated to his name. "It is really exciting," said John-Paul Somerville, operations director of the Lenkiewicz Foundation.

"The international exhibition is setting a new standard. It is an ambitious challenge which will put some strain on our resources. But it shows what is possible now the estate is settled."

The exhibition will also help raise the artistic profile of Plymouth as the city bids to become the UK City of Culture in 2017. Plymouth Culture Board is due to submit an expression of interest in taking on the role to the Department of Culture, Media and Sport early in the New Year. If successful that could result in a multi-million-pound tourism boost and the hosting of events such as the Brit Awards for music, Turner Prize for art and BBC Sports Personality of the Year ceremony.

Lenkiewicz Foundation spokesperson Anna Navas added: "Since Robert's death the Foundation's activities have been restricted by legal complications surrounding the long-standing estate. "But with these issues resolved we can now pursue our primary objective of promoting Robert's work and ideas to the widest possible audience. "The first large exhibition on such a scale reflects our ambitions for Robert's work. With his family connections we feel the heart of Europe is a good place to start, and we will of course bring any success home with us. "With developments well under way to establish the foundation with a permanent base on the Barbican, what's good for Lenkiewicz is good for Plymouth." When he died in 2002, Lenkiewicz's estate was initially valued at £6.5 million. But he left huge debts and complicated affairs, which forced the sale of large parts of his collection.

Full details of the final settlement of the estate have yet to be revealed. However, between 30 and 40 oil paintings remain, plus many more watercolours and sketch and notebooks, and thousands of books, mainly on art history and philosophy. Mr Somerville said a "substantial" amount of cash would also be coming to the Foundation, which was expected imminently. This would help speed up the opening of Lenkiewicz's library and works to the public in the former St Saviour's church in Lambhay Hill, the Barbican. The building is also intended to become a place for people to study his work.

Lenkiewicz was shunned by critics and the established art world. He was known for his traditional realistic portrait style but his lifestyle and the subjects of his works were anything but. Lenkiewicz was known for his themes on sexuality, mental handicap and suicide and people on the margins, such as vagrants. His projects often ran to hundreds of works. He is believed to have had about 12 children from a string of partners. His work has always been popular with the public, though.

The Lenkiewicz show in Leipzig, eastern Germany, will expand on the Human, All Too Human exhibition of 25 oil paintings and other works which ran at the Royal William Yard last June. That title comes from a Friedrich Nietzsche work and reflects his interest in the German philosopher's work. The choice of Germany also chimes with the painter's Jewish/central European emigrant background.

But the scale of the German exhibition will be considerably greater, totalling about 100 works. Thirty large-scale oil paintings and a further 30 in other formats, including watercolours and in gouache, will travel to Leipzig. Copies of his notebooks will also go on display. The exhibition will run for a month from the middle of next June. The venue will be the Spinnerei, once Europe's biggest cotton mill but now a complex devoted to creativity and culture.

"The Bluebeard of British art" 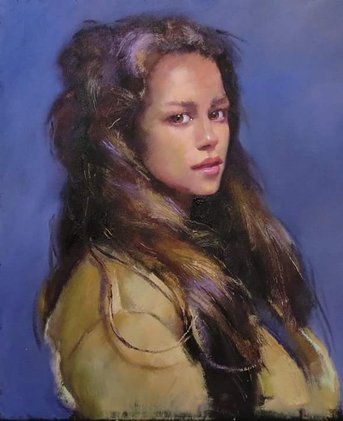 A portrait of Romney, by Robert lenkiewicz.

The Robert Lenkiewicz Facebook group is an informal public group for sharing and discussing the work of the artist, including the latest gossip and general miscellany. Click the link...

Reuben Lenkiewicz, one of Robert's sons, has opened a new gallery.

Named The Reuben Lenkiewicz Fine Art Gallery, and based in Ashburton, Devon, it specialises in prints and paintings by Robert Lenkiewicz, along with other local artist's work too. Reuben himself practices photography and is also an acomplished guitarist, he has produced prints of his photographs which will also be on display in the gallery.